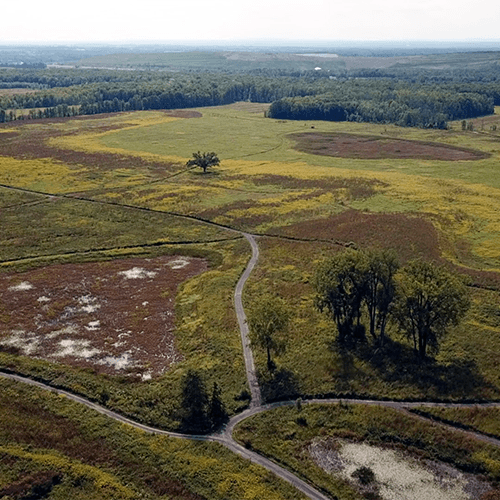 At Seneca Meadows, we hold ourselves to a higher standard, often going beyond the regulatory requirements to protect and preserve the environment. Our Seneca Meadows Wetlands Preserve stands as a testament of this resolve.

The industry standard for wetlands mitigation projects is a 3:1 exchange ratio. In 2007, Seneca Meadows raised that standard by designating 8 times the taken acreage for permanent conservation with a 576 acre wetlands creation and enhancement project.

The project involved two distinct tasks: to restore and enhance 157 acres of existing wooded wetlands, and to create 419 acres of new wetlands. With a team of experts, and the guidance of the U.S. Corp of Engineers and the New York State Department of Environmental Conservation, we designed our project and began construction.

The restoration effort required few modifications: Vegetative management, seeding and planting would give us a healthier ecosystem, and a greater diversity of wildlife.

The creation of new wetlands was much more complex. The design called for a variety of wetland types, including: emergent, wet prairie, wet-mesic prairie, forested wetlands, upland savannas and tall grass prairies.

Each of these wetland types requires different elements. Some need more sunlight, some need high soil saturation, and some need to be separated from other wetland types. All wetlands need to be free of non-native, or “invasive” plant species.

Invasive species wreak havoc on wetlands. They overpower native plants, destroying the food source and homes of many organisms. Removing them was a number one priority.

To provide for the other needs of our wetlands, we had to reshape the landscape. Since the land was formerly used for agricultural purposes, it was relatively flat, and embedded with drainage tiles. We removed the tiles, built up some areas, lowered others, dug ponds, removed trees, and created new drainage channels for the various types of wetlands.

Once the earthwork was complete, we took on the most painstaking task of our project: the planting of nearly 200,000 plants, trees, and shrubs, and the seeding of over 400 acres with native plants and trees. It took thousands of man hours, but the results are breathtaking: lush wetlands of diverse beauty, teeming with countless species of wildlife.

In addition to our 576 acre wetlands preserve, Seneca Meadows also dedicated 500 acres of floodwater conveyance wetlands for permanent preservation. This land, which was not part of a mitigation measure, runs along a section of stream on our property, and connects to our wetlands preserve, bringing the total preserved land to 1100 acres.

Nature preserves require a lot of care, and since this property will be conserved forever, Seneca Meadows needed to find a permanent steward. The National Audubon Society was a perfect fit.

Audubon’s mission is to conserve and restore natural ecosystems, focusing on birds, other wildlife, and their habitats for the benefit of humanity and the earth’s biological diversity. Once the Seneca Meadows Landfill is no longer in operation, Audubon will assume the care and management of the wetlands preserve, ensuring that this beautiful habitat retains its ecological vitality for generations to come.

This diversity of species along with the thirty-five (35) New York Species of Greatest Conservation Need being observed at the Seneca Meadows Wetlands Preserve enforce the importance of the preserve.  Seneca Meadows Wetlands Preserve was designated an Important Bird (IBA) area in 2014 by Audubon New York.  The Important Bird Area program is an international bird conservation initiative with the significant goal of identifying the most important places for birds and conserving them. IBAs are identified according to standardized, scientific criteria through a collaborative effort among state, national, and international non-governmental conservation organizations, state and federal government agencies, local conservation groups, academics, grassroots environmentalists, and birders.  The site met the IBA at-risk Criterion because of the number of breeding Pied-billed Grebe and American and Least Bittern.  Some of the most abundant bird species that rely on Seneca Meadows are Common Merganser, American Black Duck, Mallard, Wood Duck, Great Blue Heron, Snow Geese, Northern Shoveler, Blue-winged Teal, Marsh Wren, Bobolink, Savannah Sparrow, Short-eared Owl (winter), Rough-legged Hawk (winter), Common Moorhen, Wilson’s Snipe and Northern Harrier.

In 2017 a formal partnership was developed with Braddock Bay Bird Observatory to install a radio tower to collect and track bird flight data.  Braddock Bay Bird Observatory chose a site atop the Seneca Meadows landfill to launch a new radio tower as part of the Western New York MOTUS Network.  The Western New York MOTUS Network is a network of radio receivers currently developing to be used in the tracking of birds and other terrestrial animals.  Independent researchers deploy nanotags primarily on birds and bats, which are then detected whenever the tag is within the detection radius of one of the receiving stations.  The tower located at Seneca Meadows landfill provides a unique elevation for expanded coverage, and an annual bird banding demonstration event is held at the Seneca Meadows Wetlands Preserve to further highlight this ongoing project. This tracking system will be a critical source of knowledge for wildlife conservation and research well into the future.

The Seneca Meadows Wetlands Preserve has hosted several college and university research studies throughout the past 10 years, and is currently hosting a 2-year SUNY ESF Master’s candidate pollination research study through 2020 as well as a 5-year Cornell University PhD candidate plant & pathogen research study through 2024.  This plant & pathogen research already resulted in a site visit from Dr. Carla Di Antonio from University of California at Santa Barbara in late September of 2019. Her work includes restoration ecology research in Hawaii as well as in California grasslands. She was surprised to know that there are native prairie habitats in New York and was very impressed with the scale and design of the preserve.