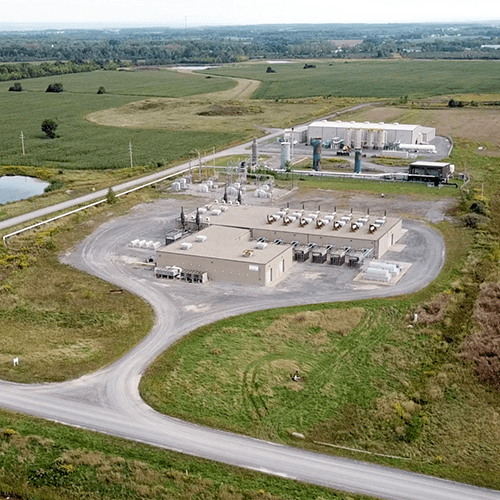 Reducing America’s reliance on foreign oil has been the goal of government and industry for decades. Seneca Meadows joined the effort in 1995 with the establishment of a landfill gas to energy plant on its site. The plant, which is owned and operated by Archaea Energy is one of the largest in the nation and produces sufficient electricity for thousands of homes and businesses.

Landfill gas, a byproduct of organic waste decomposition, is collected from the landfill and piped to the gas plant to burn as fuel in the engine generators. Burning landfill gas produces yet another benefit to the environment: it destroys 98% of non-methane organic compounds.

Landfill gas is piped from the waste cell to the Aria Energy Gas Plant.

The landfill gas is prepared in a scrubber system prior to entering the engine generators.

The prepared landfill gas is burned in the engine generators to produce electricity.

The electricity generated at the Seneca Energy Gas Plant is fed into the local grid, providing electricity for thousands of homes and business.